New Haven Farms is in the process of quantifying the impact the organization is having on its members’ health.

Since its conception, New Haven Farms has made significant strides in helping local residents improve their health by creating access to healthy foods. Medical providers from Fair Haven Community Health Center refer patients, or members, who have at least two diabetes risk factors and an income within 200% of the 2010 U.S. poverty line. Members attend weekly cooking demonstrations, nutrition classes and farming sessions. In addition, members also take home a box of nutrient-dense fresh vegetables each week.

“We are conducting such a rigorous study because we want to know the impact of access to local food and nutrition information on food security and obesity” said Monique Centrone Stefani, Research Team Leader at New Haven Farms. “Conducting research on the New Haven Farms’ program is important because of the implications it will have on a much broader scale,” she said. “Nobody is doing research like this.”

There is a growing body of research that shows the longer immigrants live in this country, the worse their rates of heart disease, high blood pressure and diabetes. According to a recent article (May 18, 2013) in The New York Times, “this pattern goes against any notion that moving to America improves every aspect of life.” New Haven Farms’ research may be able to show how this pattern can be reversed, as people incorporate healthier food and good nutritional practices into their daily lives. How people get to know the origin of their food is an integral part of the knowledge members take with them in this program as well. 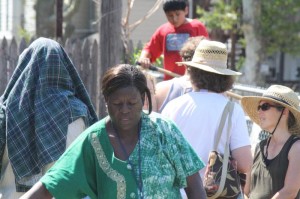 Obesity rates in New Haven County are high. About 23% of adults in New Haven County are obese [m1] , according to a report from the New Haven Food Policy Council, a volunteer advisory board for the City of New Haven. Monique was one of 11 Council members who were appointed by the Mayor and the Board of Aldermen. The link between obesity and increased risk of heart disease and diabetes is well established.

While heredity and bad eating habits are part of the problem, the cost and availability of fresh fruits and vegetables are contributing factors. An alarming number of New Haven residents are food-insecure, Monique explained. This means they lack access to enough healthy food to fully meet their nutritional needs, she said. There is increasing evidence that those that are food insecure are more likely to be at risk for overweight and obesity.

Lack of affordability and availability make it much more difficult to eat fresh food, she said. “It’s easier and much less expensive to buy processed food than purchase healthy food, she added. Between 2010 and 2011, 23.6% of New Haven households received SNAP benefits and nearly 80% of New Haven public school students were eligible for free or reduced-price lunches, according to the Food Policy Council report. “These are indicators of poverty and food insecurity,” she said.

In collecting the data and conducting research, New Haven Farms will be able to determine its impact on a local level. “As we help transform the local food systems we want to see what role we can play and on a much larger scale,” she said.